Choose to be optimistic. It feels better. Dalai Lama XIV

There seems to be a collective fascination with how bad things are going these days. If you listen to the media, the world is pretty much going to hell in a hand basket. Most of the news reported in the mainstream media is concerned with tragedies, destruction, misery, chaos and naming and shaming people.

The folks at Future Crunch call it the bad news bubble – where so called respectable media outlets say they are reporting news and giving us an objective view of the world, but what they are really doing is drowning us in a daily deluge of misery, conflict and negative headlines. Bad news sells. Negativity is big business – just take a look at the headlines on the covers of magazines that line the checkouts in our supermarkets. There is no incentive to report good news because it doesn’t get any traction.

Every headline and news story tells us that its getting harder to find a job, almst impossible to buy a house (in Sydney anyway) and we need to maintain a constant lookout, reporting anything out of the ordinary in case it is linked to terrorism. When we are bombarded with a never ending barrage of bad news, it starts to seep into our mindset.  And the frequency and the probability of something bad happening is magnified in our minds because we can easily recall the bad news stories and not many (if any) good news stories. Just take a moment and pause and bring to mind a recent good news story……stumped? Well you’re not alone.

Believe it or not, we’re living in the healthiest, wealthiest, most democratic and most peaceful time in human history. But you wouldn’t know it because these stories are invisible. Because they don’t shock us or make us react, they don’t sell and they go unreported or under reported.  So how do we break out of the bad news bubble? No one really has an answer to that question. But at the very least, we can start to address the imbalance and actively look for and read good news. Future Crunch writes a fantastic newsletter every fortnight reporting on amazing scientific breakthroughs and good news from around the world that don’t make it into mainstream news bulletins or publications. You can subscribe to the good news-letter here.  And if you need good news right now, click here.

For my part, I will share this photo with you. 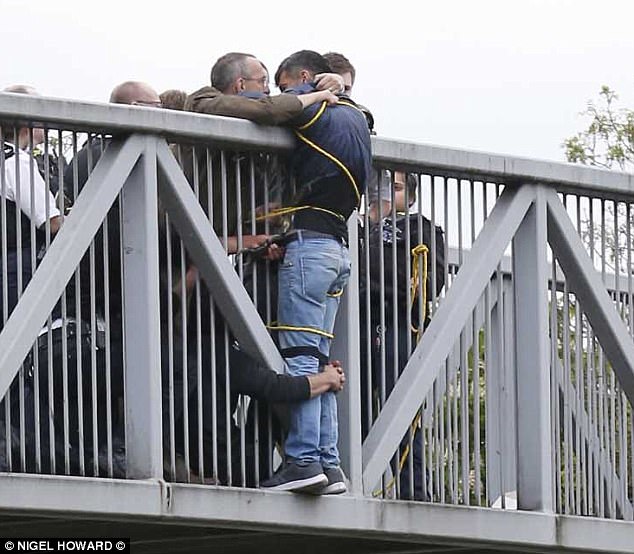 A man wanting to jump off a bridge in London, is talked around by strangers who proceeded to hold him and talk to him for 2 hours until help arrived to get him down the bridge safely.2 hours. Look at the way he is being held by complete strangers – the grip, the arms around his neck and his legs. Feel the love, compassion, selflessness and sheer determination shown by complete strangers to a fellow human being in distress. There is still so much more good (than bad) around us.